In natural science, a hydrocarbon is a natural atom comprising completely hydrogen and carbon. Hydrocarbons are an illustration of gathering 14 hydrides. Hydrocarbons are dreary and hydrophobic, with a slight scent. As a result of their diverse compound designs, it’s difficult, to sum up anymore. The greater part of anthropogenic hydrocarbon discharges come from the copying of petroleum derivatives, which incorporates both fuel creation and ignition. Ethylene, isoprene, and monoterpenes are largely normal hydrocarbons found in plant emanations.

Alkanes are organic compounds made up of carbon and hydrogen atoms that are single-bonded. Alkanes have the formula CnH2n+2 and are classified into three groups:

Alkanes are a class of chemical compounds that have only one covalent link between carbon and hydrogen atoms. Single covalent bonds between carbon and hydrogen atoms make up this class of compounds. Coal gases, produced by destructive distillation of coal, LPG (Liquid Petroleum Gas), and CNG (Compressed Natural Gas) are examples of fuels. Additionally, kerosene oil is utilised as a household fuel. All of these fuels are made up of a combination of hydrocarbons, which are energy sources.

CnH2n+2 is the general formula for alkanes, with n=1, 2, 3, 4. so on. Alkanes have a suffix- ane in the IUPAC system, and the prefix is determined by the number of carbon atoms. The following are some of the saturated hydrocarbons names:

Because there is only one method to link 1, 2, and 3 carbon atoms, the first three alkanes, methane, ethane, and propane, have just one structure. Butane, on the other hand, can have two isomers. 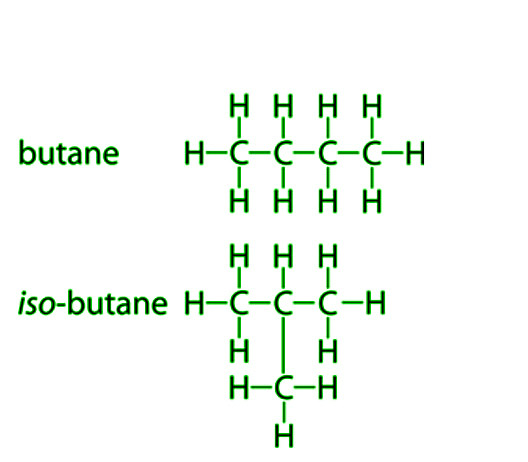 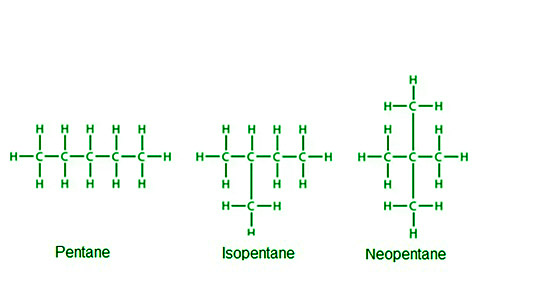 Hexane has five isomers, heptane has nine, octane has eighteen, nonane has thirty-five, and decane has seventy-five.

Any of the following techniques can be used to convert alkyl halides into alkanes:

Any of the following procedures can be used to produce alkanes.

The intermolecular force of attraction determines the physical characteristics of alkanes. Let’s have a look at some of the properties: 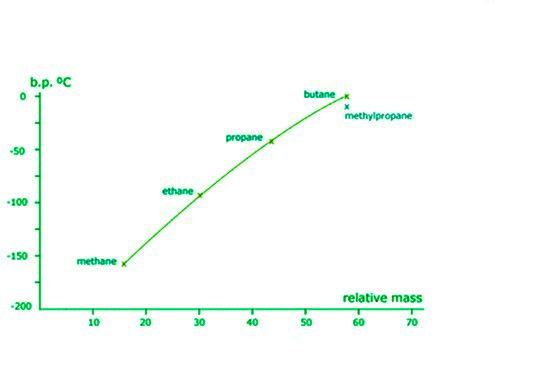 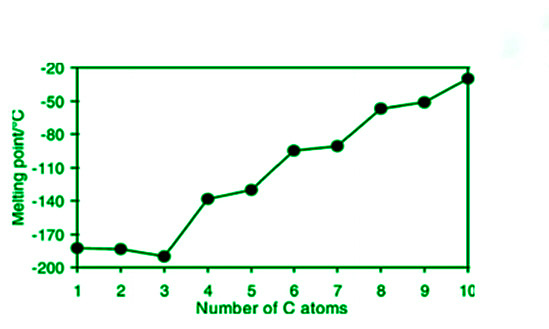 Question 1:  What are the properties of alkanes?

Alkanes have three physical properties: they have a high melting point, a high boiling temperature, and they are soluble in non-polar solvents but insoluble in polar solvents.

Question 2: What are the first four alkanes?

The first four alkanes are methane (CH4), ethane (C2H6), propane (C3H8), and butane (C4H10). The simplest alkane is methane gas, which has the chemical formula CH4.

Question 3: What is Halogenation?

Halogenation is the process of exchanging a hydrogen atom with a halogen such as F, Cl, Br, l. It can be done by heating the mixture between 520 and 670 degrees Celsius, or by using UV radiation.

Question 4: What is Nitration?

Nitration is the process of replacing a hydrogen atom with a nitro group. Alkanes do not react with nitric acid at usual temperatures, but when a combination of an alkane and fuming HNO3 vapours is heated at 423–673k under pressure, alkanes are nitrated.

Question 5: Why alkanes are insoluble in water?

Due to the tiny electronegativity among carbon and hydrogen and the covalent property of the C–C bond and C–H bond, alkanes are non-polar sort of particles. Alkanes are insoluble in polar solvents like water, liquor, and so forth, however are profoundly dissolvable in non-polar solvents like petrol, ether, benzene, carbon tetrachloride, and so on .