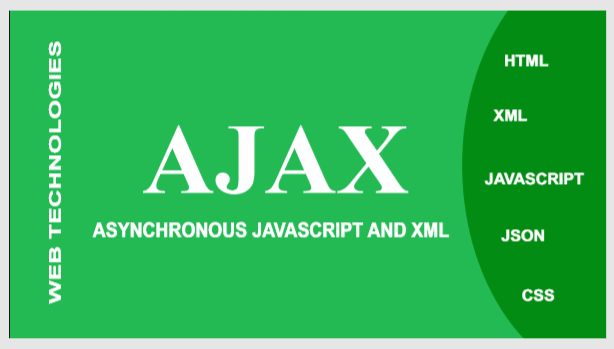 AJAX is an abbreviation for Asynchronous JavaScript and XML. AJAX is a technique not a programming language which is used by the developers to make the websites behaving like desktop applications. It operates on the client-side for creating asynchronous web applications. AJAX is a group of technologies that uses number of web technologies for creating a set of web development techniques.

AJAX allows multiple web pages to be updated one by one by exchanging the data with the web server in the background. Which means that the part of the web pages can be updated without refreshing the whole page again and again.

Let’s take an example of facebook page, in facebook news feed when we press the like, love, etc button or comment on any picture then it will simply like, loves the picture without reloading the whole page. Whereas sometime before, when we hit the like button it will reload the whole pages. This change is made because of AJAX i.e. AJAX allows the part of the web pages to be updated without disturbing the whole page.

AJAX uses the mixture of both the following :

Technologies involved in AJAX are:

AJAX: A new approach to Web applications, based on techniques used on Google pages.

My Personal Notes arrow_drop_up
Next
SMPS full form
Recommended Articles
Page :
How to pass both form data and credentials on submit in ajax ?
09, Dec 20
How to submit a form using ajax in jQuery ?
10, Nov 21
Ajax Introduction
09, Jul 18
How ajax works? Difference between angular js and jquery
12, Oct 18
jQuery | ajax() Method
05, Apr 19
How to display search result of another page on same page using ajax in JSP?
29, Aug 19
How to set timeout for ajax by using jQuery?
15, Jan 20
Difference Between JSON and AJAX
30, Mar 20
Asynchronous file transfer in AJAX
26, Apr 20
ReactJS | AJAX and API
08, May 20
How to use simple API using AJAX ?
02, Jun 20
How to get return text from PHP file with ajax ?
04, Jan 21
Get request using AJAX by making Custom HTTP library
13, Jul 20
POST request using AJAX by making Custom HTTP library
17, Jul 20
How to send button value to PHP backend via POST using ajax ?
27, Nov 20
How to design navigation panel with ajax loading using jQuery EasyUI Mobile ?
14, Dec 20
How to pass multiple JSON Objects as data using jQuery's $.ajax() ?
30, Apr 21
How to send data from client side to Node.js server using Ajax without page reloading ?
28, May 21
How to demonstrate the use of Ajax loading data in DataTables ?
19, May 21
Difference between Node.js AJAX and jQuery
21, Jul 21
How to make ajax call from JavaScript ?
28, Sep 21
How to do exception handling in Ajax ?
26, Oct 21
How to get JSON response in Ajax ?
16, Jan 22
Where in a React component should you make an AJAX request ?
27, Feb 22
Article Contributed By :