Agile testing is a relatively newer approach to software testing. It follows the principles of agile software development as called out in the Agile Manifesto. About 10-12 years back, most of the projects were run in Waterfall fashion. However, With the basic advantage of quicker time to market, Agile methodology is gaining popularity now a days.
In Agile, software development and testing are continuous, and it is a collaborative effort between testers, developers, product owners and even customers and testing is not a separate phase like waterfall model.

The difference with Agile methodology is that the testing starts at the very start of the project, even before development has started and gives a continuous feedback to the development activity.

Also, as a thought process also, testing in agile methodology is different since the onus of quality lies with every one in the Agile team and not just QA i.e in a way everyone on the team is responsible for testing.

The idea behind Test driven development is to make each change small enough to iterate rapidly. As you automate and implement  each feature or a change you’ve  basically added something valuable to your overall system, and you’re ready for a shippable product and product owner feedback.

Since, BDD involves thinking in a common language, It helps teams to have the right conversations at the right time and thus maximizing the amount of valuable code produced. It also has potential to identify gaps in understanding and areas where we need more information before we actually know what is to be done.

A practical BDD project flow is described in figure below. 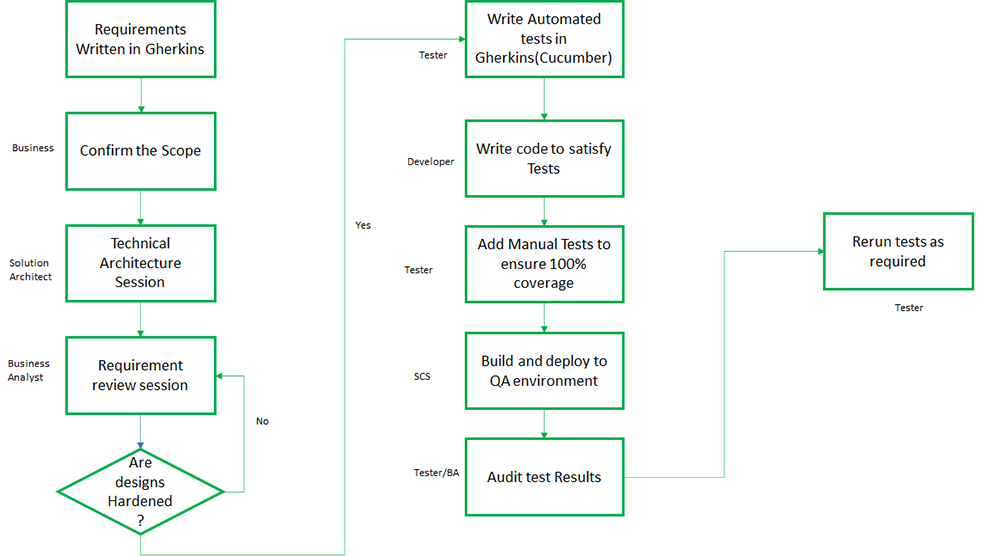 Given : This clause describes the pre conditions

When : This clause defines the trigger point or an operation.

Then : This clause defines the outcome of the event or the operation.

Closing thoughts :
BDD approach can be a good choice when you need everyone on the team to be engaged without digging into technical aspects. Also, this approach is not ideal for all project types. Shorter projects may get delayed using this method. It can also make projects complicated and sometimes slow them down. It also requires a major mindset shift from the traditional way of working.