Level of accuracy to scan characters accurately is based on how clear writing is. Scanners are improved to be ready to read different styles and sizes of text also as neat handwriting. There is utmost accuracy in the text scanned with OCR but then also there is the need to check as some letters are often misread. OCR is employed to automatically recognize postcodes on letters at sorting offices.

In OCR, scanner is provided with character recognition software which converts bitmap images of characters to equivalent ASCII codes. First step in whole process is to create bitmap of image of document then with help of software OCR translates thee array of grid points into ASCII text which pc can understand and process it as letters, numbers and special characters.

OCR software process bitmap of every character and compares it with set of characters which machine has been programmed to acknowledge to translate bitmaps into text, Whichever character pattern it matches or nearly matches, is taken into account to be character read. If a scanned character doesn’t match with any of the already stored character patterns, it’s rejected. 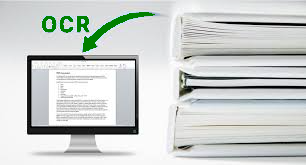