Advantages and Disadvantages of Hub

Hub is that the central point of networking device that connects multiple hosting devices to one network. It allows data to urge transferred between themselves by functioning as a multi-port repeater. For this purpose, it uses either fibre optic cable or a twisted pair cable.

It is a networking device that allows connecting multiple Ethernet devices (i.e. hosts) using twisted pair or fibre optic cable. It operates at the Physical Layer i.e. layer-1 of OSI stack. Generally, the hub works on (Physical layer) a bit like switches it also connects computers together. 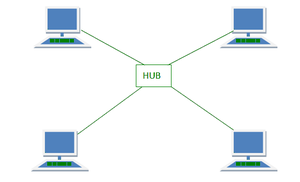 It functions as a multi-port repeater which broadcasts data to all or any the ports where devices are connected. Following are features of the network hub device –