Advantage and Disadvantage of Mesh Topology

In mesh, all the computers are interconnected to every other during a network. Each computer not only sends its own signals but also relays data from other computers. The nodes are connected to every other completely via a dedicated link during which information is travel from nodes to nodes and there are N(N-1)/2 links in mesh if there are N nodes. Every node features a point-to-point connection to the opposite node. The connections within the mesh are often wired or wireless. 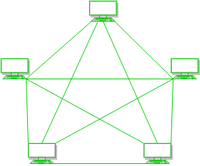 There are two types of Mesh topologies –

All the nodes within the network are connected with every other If there are n number of nodes during a network, each node will have an n-1 number of connections. A full mesh provides an excellent deal of redundancy, but because it is prohibitively expensive to implement, it’s usually reserved for network backbones.

The partial mesh is more practical as compared to the full mesh. In a partially connected mesh, all the nodes aren’t necessary to be connected with one another during a network. Peripheral networks are connected using partial mesh and work with a full-mesh backbone in tandem.