Definition: The adapter pattern convert the interface of a class into another interface clients expect. Adapter lets classes work together that couldn’t otherwise because of incompatible interfaces. Class Diagram: 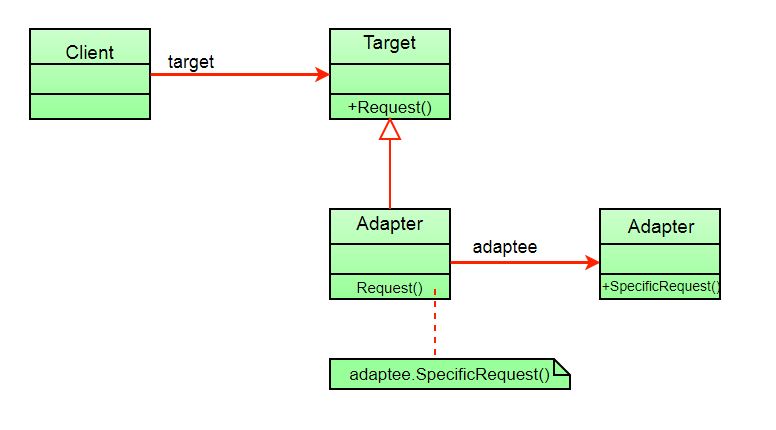 Explanation : Suppose we have a bird that can makeSound(), and we have a plastic toy duck that can squeak(). Now suppose our client changes the requirement and he wants the toyDuck to makeSound than ? Simple solution is that we will just change the implementation class to the new adapter class and tell the client to pass the instance of the bird(which wants to squeak()) to that class. Before : ToyDuck toyDuck = new PlasticToyDuck(); After : ToyDuck toyDuck = new BirdAdapter(sparrow); You can see that by changing just one line the toyDuck can now do Chirp Chirp !! Object Adapter Vs Class Adapter The adapter pattern we have implemented above is called Object Adapter Pattern because the adapter holds an instance of adaptee. There is also another type called Class Adapter Pattern which use inheritance instead of composition but you require multiple inheritance to implement it. Class diagram of Class Adapter Pattern:

Here instead of having an adaptee object inside adapter (composition) to make use of its functionality adapter inherits the adaptee. Since multiple inheritance is not supported by many languages including java and is associated with many problems we have not shown implementation using class adapter pattern. Advantages: