Ethyne is the simplest alkyne since it consists of only two carbon atoms, which are triply bonded to each other. One of the Pure ethyne is known to be highly unstable. As it contains a carbon-carbon triple bond so acetylene or Ethyne is an unsaturated hydrocarbon. It is widely used as a fuel and chemical in the building block. In it its purest form it is unstable that’s why it is commonly handled as a solution and because of its impurities, the commercial-grade acetylene has a striking odor.

Edmund Davy discovered is the first one who identified it in 1836, as a “new carburet of hydrogen”. Later on, Marcellin Berthelot, a french artist rediscovered it in 1860 and coined the name acetylene.

Ethyne is an organic chemical compound of an alkyl group with the chemical formula C2H2 which is also known as Acetylene. This compound is a hydrocarbon Since it is entire chemical composition only features hydrogen and carbon atoms. 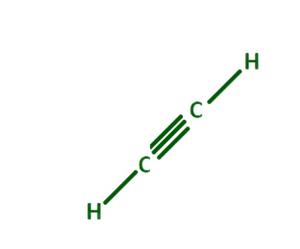 This can be prepared by subjecting methane to partial combustion. This compound Ethyne can also be prepared from the hydrolysis of calcium carbide (a chemical compound with the formula CaC2, also known as calcium acetylide). The chemical equation for this reaction between calcium carbide and water is,

Thus the hydrolysis of this reaction of calcium carbide produces calcium hydroxide and ethyne as the final products.

Acetylene is a colorless gas that has a mild ether-like odor. It is easily soluble in water, chloroform, acetone, and benzene and slightly soluble in carbon disulfide and ethanol. when compared to air It is lighter and easily ignites. It is the simplest alkyne chemical compound C2H2 with a chemical name also called Ethyne or Narcylene or Vinylene.

Acetylene is a brilliant nucleophile because It is a highly reactive chemical compound owing to its Π electrons in the C-C triple bond, with a wide variety of reactions to obtain commercial products, such as acetylide, acrylic acid, a vinyl compound, and alcohol. ACETYLENE can be used to obtain organometallic compounds when reacts with metal like copper.

Question 1: What are the side effects of Acetylene on health?

If people come in contact of acetylene, it may lead to headache, loss of consciousness, and dizziness. If a higher percentage of Ethyne is present in the air then it can lead to death due to choking .

Question 2: Why ethyne is called Acetylene?

Edmund Davy discovered is the first one  who identified it in 1836, as a “new carburet of hydrogen”. Later on the  Marcellin Berthelot french artist rediscovered it 1860 and coined the name acetylene.

Question 3: What is the boiling and melting point of Acetylene?

Question 4: Is Acetylene a Saturated Acid?

It is considered an unsaturated organic compound due to the presence of a triple bond between the two carbon atoms.

Question 5: How does Acetylene react to metal?

As Acetylene is colourless in its pure form, and also has a good scent. With its several functions, acetylene is now known as being capable of inhibiting top-line corrosion usually occurring in gas pipelines made of metal. It can be used as a corrosion inhibitor, owing to its high volatility.

Question 6: Is Acetylene a Saturated Acid or not?

No, Acetylene is considered as an unsaturated organic compound because of the presence of a triple bond between the two carbon atoms.

Question 7: Why Acetylene is nucleophile?

Acetylene is nucleophile because It is a highly reactive chemical compound owing to its Π electrons in the C-C triple bond. With wide variety of reactions to obtain commercial products, such as acetylide, acrylic acid, a vinyl compound, and alcohol.