7 Common Mistakes That Beginners Should Avoid While Learning to Code

Learning to code is intimidating for beginners. You buy tons of learning resources. Books, online courses some free resources or lectures and the journey is really exciting for you. You want to consume as much information as you can and you feel you have so much potential to learn. You’re excited to get the job as a programmer. However, after two to three months you realize that your strategy is not moving you closer to become a good programmer.

You’re consuming a lot of information but at the end of the day, you feel like you’re not getting closer to become a programmer. It’s a sign that you’re making some mistakes while learning to code. In this blog, we will discuss some common mistakes which a programmer should avoid during the learning phase of their coding journey.

1. Spending a Lot of Time in the Research of Technologies Instead of Writing the Code Actually

Beginners often get confused and do endless research on technologies, languages, or frameworks which is one of the quite common but big mistakes they make during the learning phase of programming. It is completely ok to do some research about language or framework but doing the over-analysis on technologies for months is not going to give you any positive results. Just look at one of the blog posts on a medium. A beginner accepted that he did this mistake and he learned nothing in the entire year of his learning phase. 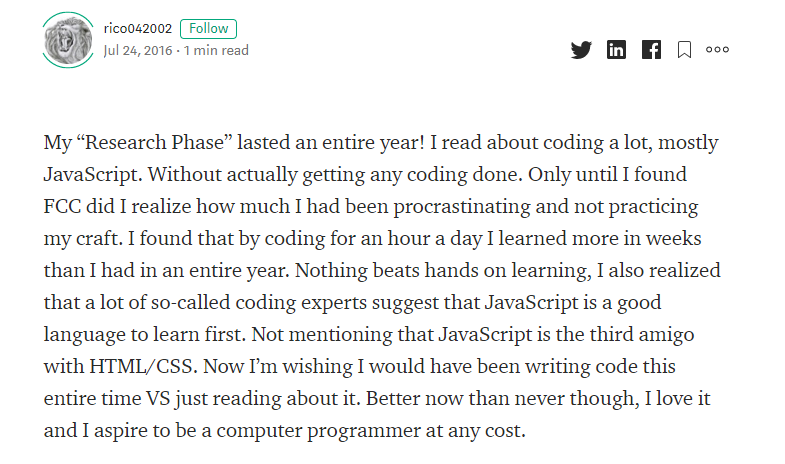 Always remember that you can’t learn coding without getting your hands dirty in it. It’s all about practice and it’s all about writing the actual code instead of just reading about it. No matter what technology, language, or framework you choose, the thing which matters a lot in coding is your problem-solving skill. All the languages will teach you the central concepts of programming and that’s important. Solving the complex problem by breaking it down into smaller pieces of code is important in coding rather than focusing on technologies you chose to learn and read about it. So instead of reading about the syntax and doing endless research, get your hands dirty in the coding start practicing it. Once you master one language, picking up the second language will be easier for you.

2. Not Checking the Working of Your Code Constantly and Letting the Code Pile up Endlessly

A lot of beginners make this common mistake. They write the code for their application and forget about checking it constantly in the middle of writing it. Later when they run the application or the file, they get a bunch of errors and it becomes horrible for them to find out where they went wrong. A good developer keeps checking the working of code just to make sure that the feature which they are implementing is behaving the same way it is supposed to behave.

When you keep checking your code behavior it becomes easier to debug the single problem but when you let your code pile up endlessly you may face a scenario where the ten problems will be connected and the whole application will have unexpected behavior. You will just waste your time in finding out where you went wrong and what’s the actual source of the problem. So before you move further to the next thing it’s good to double and triple check the code and the working of it.

A lot of beginners do not interact with the other developer or the programming communities due to imposter syndrome or some other reason. This is one of the common and big mistakes most programmers make. During the journey of learning to code, it’s always good to embrace the programming community to learn from each other. Stackoverflow, Reddit, etc all these online platforms not just helps in getting the solution for the coding-related problems but also helps in learning the best coding approach from the top programmers sitting across the world.

Collaborating with the other programmers and sharing your knowledge is a sign of good programmers. Stay active on these platforms as much as you can and don’t feel apprehensive about attending events or commenting on these online platforms. Taking part in the coding conversation, working on some projects with other programmers is one of the best ways to improve and build the skills.

4. Doubting on Your knowledge and Ability When You See the Errors

Getting the error message is the part of programming but as a beginner, you should not allow yourself to get affected by these error messages. Screwing up in coding is quite normal and it’s ok to make mistakes in coding. When you keep trying to solve these errors from different resources you become much better at coding and you become much better at debugging. You start understanding why your code is giving this error message, what they mean and how it can help you solve problems. It takes some time to learn the error message and understand the pattern to fix the coding problem.

It’s not a sign that you’re a bad programmer if you find the error message on the screen. When you see the error message, firstly you need to find out its meaning and then you need to approach the problem step by step to fix the problem. Search on google about the error message, take the help of the online community, try an alternate solution, if it doesn’t work try the next one. This way you learn the pattern of fixing the error and you also become better at coding and debugging eventually.

5. Ask for Help in a Wrong Way

At some point in time, every beginner gets stuck in some coding problems during the learning phase of programming. It’s quite common and asking for help from someone is ok. A lot of beginners don’t get a clear and concise answer for their problems because they don’t understand how to ask the question in the right and constructive way. They don’t understand what details they should provide, how to phrase a question, how to explain what solution they have tried, and how things are connected in their code. Remember that whatever community (StackOverflow, Reddit) you’re visiting to ask your question, ask that in the right way to get the correct solution quickly and easily. Below are some points to keep in mind to ask the question in the right way…

6. Not Paying Attention to Change the Bad/Spaghetti Code

Your code is similar to the exercise you do in your gym or a daily workout plan. Every exercise has a correct way to do it and doing the exercise in the correct form makes the workout more effective. A similar thing happens in coding as well. Often programmers are lazy in making the changes in their code but sometimes avoiding it completely makes your code horrible and frustrating for other developers to work on that.

Programmers write a lot of bad code but if you’re in the learning phase it’s always good to find the most effective way to solve the problem. Even experienced programmers do this and they make changes in the code, refactor the code, or optimize the code from time to time. Changing the code will improve your coding skill and it will make your code much better and cleaner. So make a habit to inspect your code, understanding its behavior, and thinking about writing a better solution for it.

7. Giving up Just Right Before the Change is About to Happen

Programming needs a lot of patience and time to learn. It needs discipline, focus, time, effort, and attention from programmers. A lot of beginners give up right before they’re about to see the results. And it happens generally due to the lack of patience and frustration in programming. A lot of things are overwhelming in programming and when we find that we are not getting closer to become a good programmer we give up easily. Every newbie programmer needs to understand that they’re not alone in who is facing this problem. Coding is a journey and it’s completely ok in the beginning to follow the wrong strategy of learning to code. Better to learn from the mistakes and avoid that in the future instead of giving up on coding.

Apart from these 7 mistakes, generally many people switch up between different languages when they are not getting the concepts of a single language. One should focus on one language so that they might not get confused between different languages. At starting it will be challenging for you to learn all the concepts and understand the approach of a program but with time you will get familiar and you will feel that it was so easy to learn but not impossible. After mastering a single language you will become very comfortable in this programming environment and it will be very easy for you to learn other languages.

If you avoid making these 7 common mistakes you’ll be in great shape with your coding journey. So, when you’re going to write your first line of code and build some amazing application on your own….???