Have you ever thought of building a single application to access & control all your home applications or a device that can help you to monitor & early detection of any unusual change in your body, etc…?? If yes, then the Internet of Things (IoT) is the right domain for you!! Statistically, there will be more than 25 billion IoT devices by the year 2021 which signifies that undoubtedly, IoT is the next big thing in the upcoming years. However, like other tech domains, the first thing you need to do is get proficient with a relevant programming language to learn IoT Development. 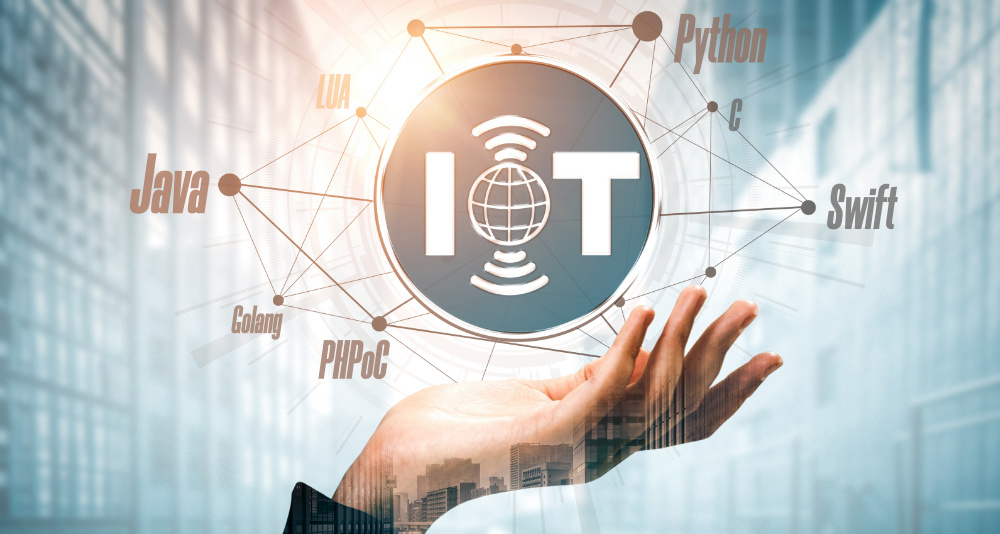 When we talk about the Internet of Things (IoT), it is concerned with the network of physical devices that are embedded with several technologies in order to connect, communicate and share the data with each other over the network. The major components of the Internet of Things (IoT) are connectivity, integration, cloud computing, sensing, & various others and the technology has its applications in multiple areas whether it be Smart IoT devices for Homes, Health Care, Automation, Retail, etc. Now, when it comes to picking out a Programming Language for IoT Development, there are several prominent factors that must be considered such as compatibility with platform & tools, efficiency, cost of development, etc.

When it comes to IoT Development, JAVA stands out among the most popular programming languages. One of the prominent features that make JAVA favorable for the Internet of Things (IoT) Development is Write Once, Run Anywhere concept which implies that the compiled JAVA code can run on any platform that supports the language without compiling it again. In general, the JAVA codes are compiled to byte code that can run on any JAVA Virtual Machine conveniently. Moreover, the object-oriented language allows you to build the applications compatible for both – Edge nodes as well as Cloud. Furthermore, the languages come up with various other renowned features such as an extensive built-in library, highly interoperable, etc. beneficial for the IoT Development.

Python is another most-recommended programming language compatible for the IoT Development. It is an interpreted language that supports the programming standards of object-oriented programming as well as functional & structured programming. The high-level programming language has an easier syntax and better code readability that makes it one of the most preferred languages for IoT by the developers. Also, the language can work on various platforms such as Windows, Linux, etc. and can be integrated with other languages such as C++, Java, etc. conveniently. Moreover, the language has rich library support, large community support, and various other features, and also it is much suitable for data-intensive applications.

How can we forget this much-acclaimed programming language!! C can be considered as one of the most widely used programming languages in the Internet of Things (IoT) world. The middle-Level programming language allows you to understand the underlying architecture of programming that provides the required flexibility to the IoT Developers. Moreover, the language has several other prominent features also such as portability, rich library, and many more. Furthermore, the language is pretty much compatible with the micro-controllers required for the IoT devices. However, it requires more effort and time as well to learn C Language effectively due to its not-so-easy syntax and layered architecture.

However, LUA is not one of the usual names in the computer programming word but when it comes to IoT Development, it has already made its strong presence among the developers. LUA is a general-purpose, high-level programming language that is specifically designed for embedded purposes. The extensible procedural language is aimed to support data description facilities and it is required to be embedded in a host client for successful functioning. Moreover, LUA comes up with its most preferred framework Node.lua built on a lightweight LUA interpreter that helps the developers to create IoT- based applications and various other enriching features such as better efficiency, portability, etc.

Golang, sometimes referred to as Go, is also one of those best languages that can be taken into consideration for IoT Development. In general, Golang is an open-source statically typed programming language, developed by Robert Griesemer, Rob Pike, and Ken Thompson at Google. The language offers several prominent features such as inbuilt concurrency (goroutines & channels) and the ability for the maximum usage of the hardware that makes it more compatible and relevant for the IoT development. Furthermore, the language provides several other crucial features also such as the rich standard library, dynamic-typing capability, etc. that can also be considered by the developers.

If you’re familiar with PHP (Hypertext Preprocessor) Language then to relate with the PHPoC (PHP on Chip) is not a big deal for you!! Meanwhile, PHPoC (PHP on Chip) is a programming language (based on PHP Language) and an IoT hardware platform. Even the syntax of PHPoC is almost similar to the PHP language. However, it can be considered that PHPoC is not only a web development language but also a general-purpose programming language compatible and suitable for IoT. Moreover, apart from the core PHP functions, PHPoC also includes several additional functions like SPI, UART, RTC, and various others beneficial for the IoT Development.

Last but not least – Swift!! If we talk about the language introduction – Swift is a general-purpose, multi-paradigm programming language that is specifically designed to create applications for iOS, iPadOS, macOS, watchOS, and tvOS. The language comes up with several prominent features such as powerful error handling, functional programming patterns, fast & secure, and many more. However, as mentioned above that Swift is particularly concerned with the development of applications for Apple’s devices so if you’re looking forward to doing IoT development for these particular platforms such as iOS, macOS, etc. then you’re strongly recommended to opt for Swift otherwise you can go with other languages as well.

So these are several programming languages that you can take into consideration to learn IoT Development. Meanwhile, you can opt for a language (from the above-mentioned list or other than that) based on your own preferences, for example – if you’re looking for a language for IoT development with the easier syntax you can go with Python or if want to learn IoT for iOs & macOS devices you can opt for Swift, and so on. However, whichever language you’d choose, you’re required to do hard work with all the dedication and consistency to accomplish your goals!!