6 Trending Programming Languages You Should Learn in 2020

Programming languages are used as a medium for communicating with the machines. And they are the formal set of instructions that produces an output. But learning any random language doesn’t help one grab a job. Why is it so? It is because the use cases for which the languages are developed are varied. For instance, If Python is a general-purpose programming language, JavaScript is used for web development, and so on. So being a beginner, intermediate, or an experienced person, acquiring the skill in the right programming language is essential to land the dream job and technology to work with. 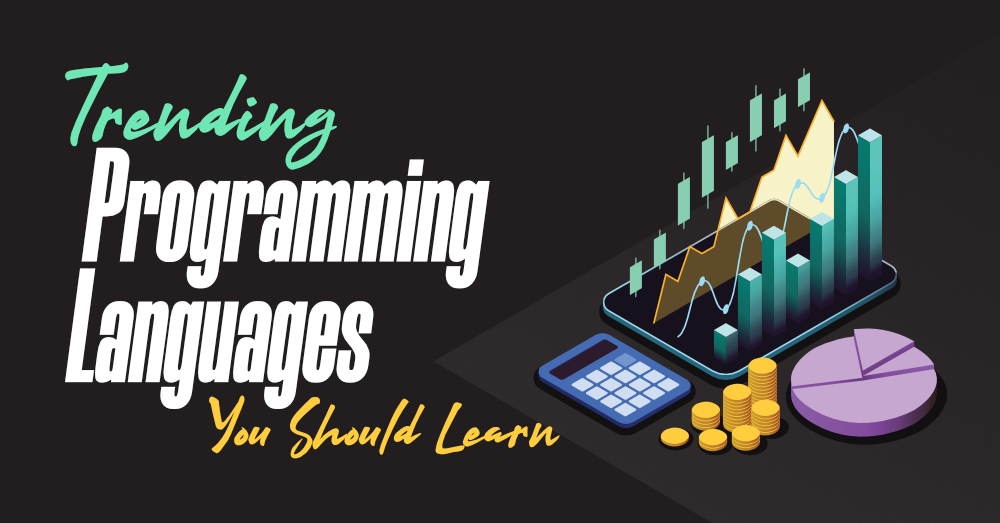 Before opting for a Programming Language to make your career with it, you need to determine its demand, scope & popularity in the tech world. Moreover, popularity is not the only factor to be considered while choosing the best language as there are several other crucial factors also such as performance, compatibility, efficiency, applications, and others. And with the same concern, below we’ve mentioned the list of 6 trending Programming Languages that you should learn in 2020:

Technological advancements like Machine Learning, Deep Learning, Web Development, Cyber Security are all exponentially growing these days and Python is the programming language that is used for all these purposes. Even Data Science industries are experiencing phenomenal growth these days that involves a wide application of Python. Meanwhile, Python is rich with its available libraries and frameworks as you can create your web applications using Django and Flask, can do Data Analysis using Numpy, Scipy, Scikit-Learn, and NLTK. And a Python developer is one of the highest-paid jobs nowadays. Therefore, to stay adaptive with the rising trends, Python is worth learning in 2020.

JavaScript is one of the most demanding programming languages in the tech world. The interpreted scripting language offers you to work on both – frontend as well as backend. Moreover, there are numerous frameworks & libraries available for JavaScript such as Angular, React, Vue, etc. to make things more convenient and efficient for the developers. There are several other remarkable features of JavaScript such as compatibility with other programming languages, platform-independent, light-weighted, and many more. In addition, various IT giants such as Google, Facebook, Uber, etc. are working on JavaScript, and they come up with various ravishing career opportunities for JavaScript Developers regularly.

The language JAVA is popular for a decade and it still has not lost its luster. The object-oriented programming language works on Write Once, Run Anywhere paradigm i.e., the compiled code can be executed on any platform (that supports JAVA) with recompiling it. The language is majorly used for the development of android applications and enterprise-scale web applications. Java comes up with various renowned features such as cross-platform compatibility, multithreaded, robustness, etc. that makes it one of the most-preferable language by the developers. Indeed, Java is a tight competitor to Python when it comes to popularity and demand in the market.

Despite being quite an old language, C is still used by a huge number of developers in the world. Even students who step into computer science and programming mostly start their programming journey with the C language. The main reason behind this enormous popularity & demand for the C language is its application for system programming such as operating system, compiler development, etc. Even though there are shallow changes that happen each day, just as Objective-C was replaced by Swift at Apple, C is still a trend in the programming world due to its clean style, the simple set of keywords, low-level access to memory, and other prominent features.

Golang is also a pretty much popular and in-demand language in the programming world. The procedural and statically typed programming language is having a quite similar syntax as of C language. The language offers you a rich standard library, garbage collection, dynamic-typing capability, and various other remarkable features. Moreover, the language can be used in Distributed systems, Big data, Cloud Computing, and other large-scale applications. As the language is developed by IT giant Google and because of its simple syntax & easy to use, it is preferred by most of the developers in recent times.

Last but not least – Kotlin. Kotlin is a statically typed, general-purpose programming language that is fully interoperable with JAVA. The language can be used with both – frontend and backend framework. It offers a great combination of object-oriented and functional programming and is highly compatible with the Java stack of technologies. Several other features offered by Kotlin are – Statically typed, Concise & Safe, Easy to learn, etc. Also, when it comes to Android development, Google has already announced Kotlin as the first choice hence if you want to start your career in Android App Development, then Kotlin is the best choice to be made in 2020.