5 Programming Languages For Every Cloud Engineer to Learn

Cloud computing has recently seen incremental growth in job opportunities for developers around the globe. The increase in job openings for cloud engineers and cloud developers is well attributed to the fact that mostly all businesses, either big or small, are switching to the cloud. It was also named one of the most in-demand tech jobs in the industry in 2020 and this demand is only going up day by day. It is estimated that more than 68% of all enterprises are using public and private clouds. Also, the cloud computing market is expected to grow to a whopping value of 832 billion USD by the end of 2025. 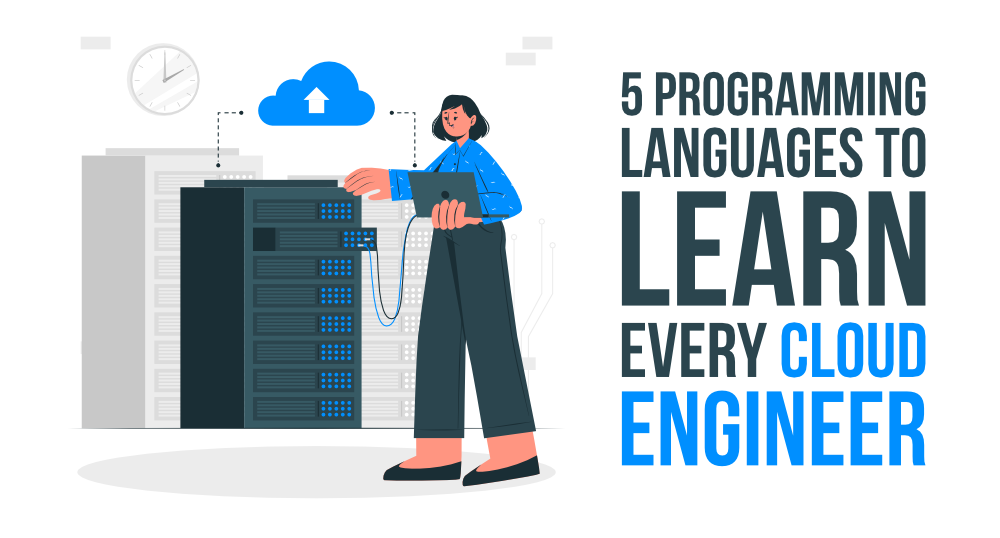 Python definitely tops the list for the best programming language to learn for cloud computing and cloud development. It comes packed with hundreds of third-party modules and support libraries to make the development process easier, more secure, and swift. Not only this, the best part is that it is super beginner-friendly and the learning curve is not that steep as compared to other programming languages. It is worthwhile to note that Python is considerably used in the development of serverless applications on Amazon Web Services and is also supported by AWS Lambda. While having cross-platform support, Python is also known as a full-stack programming language, meaning that it can be used in all parts of the cloud development lifecycle. Not just AWS has a high dependency on Python, but also Microsoft’s Azure Cloud supports Python for cloud development. With huge community support and being extensively used in the cloud, data-related technologies, and software development, Python is not going to die down in the near future and will only be replacing a lot more languages. So if you are planning to be a cloud engineer, Python is the best fit for you!

Want to learn Python programming language then this is the right place! With Geeksforgeeks Python Programming Foundation -Self-Paced course you can get in-depth knowledge of functions, loops, strings, lists, and many other things from one of our best mentors, Sandeep Jain.

Golang has suddenly gained a lot of popularity, specifically when it comes to cloud development. Developed and backed by Google, it is a modern and robust language with concurrency support, package management, and parallelism management which makes it a popular choice for developers and engineers. Golang is used on a lot of cloud platforms but it is widely preferred when working on Google Cloud (GCP). You can build efficient, scalable, and secure applications with the use of microservices and can also handle lower-level communication with the server. Google cloud itself is built on Go and with deep integration, authentication, idiomatic interfaces, and libraries, it is being widely adopted by enterprises that work on the cloud. Some cloud-based applications that are powered by Golang include Uber, SoundCloud, Atlassian, Monzo, etc. Golang has proven that it is extremely reliable as a programming language for cloud development and you should surely learn it if you want to work as a cloud engineer.

Ruby is an ideal choice for cloud developers not only because it is easy to learn and has features like security and high functionality, but also has a multitude of learning resources for creating modern applications. It contains more than 60,000 libraries and frameworks that assist you in every way possible to develop an app with minimal difficulty. It is open-sourced with active community support. Applications developed in Ruby on Google cloud can easily be integrated with Cloud monitoring, trace, error reporting, and logging. Ruby is highly dynamic and therefore tuned for web-based applications. To deploy Ruby applications on the cloud, you have to write a lot less code when compared to Java and C#. Ruby has gained a lot of interest in developing cloud-based applications and you should certainly try it.

Java is again a popular programming language when it comes to cloud development. It is easy to learn, robust, versatile, and modular which makes it easier to write codes by considering its reusability feature. It is a platform-independent language because the code is first compiled into byte code which does not depend on any platform. It is used by a vast number of enterprise cloud applications as it is secure, scalable, and portable. Almost all major cloud platforms provide SDKs for Java which in turn highly simplifies the development and enhances capabilities. If you choose to go for AWS training and Certification, Java is said to be the best choice as a programming language. Cloud apps built with Java can run on different operating systems including Linux, Windows, Raspberry, etc.

Strengthen your basic skill in Java with Geeksforgeeks Master Java Programming – Complete Beginner to Advanced which is curated for both beginners and advanced and helps them to learn all the basic concepts, data types, operators, functions and much more

ASP.NET was created by Microsoft and is used to create dynamic and robust web apps and websites with great functionalities. It has inbuilt application security through a windows authentication system, inbuilt caching, easy maintenance, cross-platform development, improved functionality along extensive support for cloud-based web application development. The best part about ASP.NET is that it is language-independent, and has managing and monitoring functionality along with being easy to learn. A lot of Azure products run on .NET and can be integrated with Visual Studio developer tools. It is largely used to build fast, scalable, and modern cloud applications that can run on almost all major cloud platforms. It is also open-sourced, with the code available on GitHub for anyone to customize, review, contribute or modify according to their own needs. This also means it has huge community support and if you get stuck, there will be developers around the world to help you out.

These were the top 5 programming languages you should go for if you are planning your career in cloud computing as a developer. All these languages are excellent and have huge community support. If you want to learn more about the skills required to become a cloud engineer then must read Skills Required To Be A Cloud Engineer