5 Operating System Concepts You Should Know As a Developer

Being a developer you might have focused your skills on problem-solving and data structure. Well, no doubt this is one of the most essential skills. Apart from that have you ever tried to know what else is more important? Consider a scenario that you’re executing a code, but your program runs too slowly. You check your code, and you find that there is nothing wrong with your code. What could be the reason behind this? 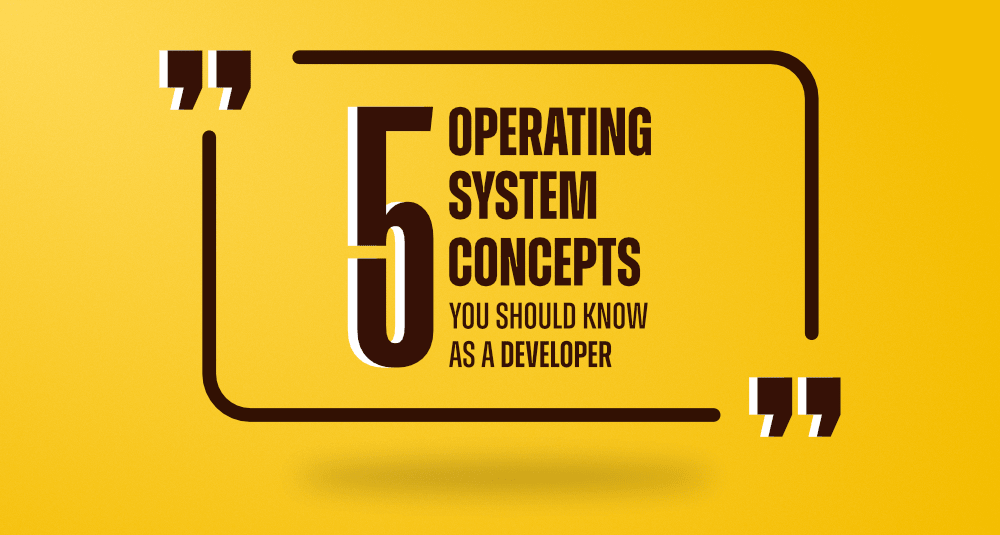 Well, one of the reasons could be your operating system. Now if you need to debug your program then how would you do that if you don’t know how your operating system works. Possibilities are there that you’re accessing too many files, you’re running out of memory or swap is in high usage. To resolve this issue surely you need to know about the swap or I/O blocking.

How will you communicate with your machine? Will you prefer locally, or you will do that on the internet? Have you ever tried to know that why some programmers prefer one OS over another?

The process is basically defined as a program in execution. The process should be executed sequentially. When you write a computer program in a text file and when you execute this program it becomes a process in your system. This process performs all the tasks mentioned in the program. A process is divided mainly into four sections: Stack, heap, text, and data.

You can define thread as a flow of execution through the process code. The thread keep the track of all the instructions that need to be executed next in the program counter. Also, the thread contains system registers that hold the current working variables. In the thread, the stack contains the execution history.

Thread can share code segment, data segment, and open files with its peer thread. When a code segment is altered by one thread, all the other threads see that. Thread is also called a lightweight process. The performance of the application can be improved through parallelism.

One thread belongs to exactly one process and none of the thread can exist outside a process. Threads are generally used in implementing web servers and network servers. Mainly there are two kinds of thread…

Kernel Level Thread: Thread-level management is done by the kernel. In the application area, you won’t find the thread management code. It is supported directly by the operating system.

The kernel also maintains the context information for the individual threads and for the processes as a whole. Scheduling is also done on a thread basis. The kernel is responsible for creating, scheduling, and managing the kernel space.

In scheduling, the process manager takes the responsibility to remove the running process from the CPU, also it chooses another process based on a specific strategy. For multiprogramming operating system scheduling is the essential part. At a time more than one process can be loaded into the executable memory. The process shares the CPU using time multiplexing once it gets loaded.

Memory management refers to the functionality of an operating system that handles and manages the primary memory. Processes move back and forth between the main memory and the disk during the execution.

Memory locations get tracked by memory management. Every time it checks how much memory is allocated to processes. It also decides which process gets memory at what time. Also, it updates the status whenever a memory gets freed up or unallocated. The operating system maps the logical addresses to physical addresses at the time of memory allocation. Mainly there are three types of addresses used in a program…

Independent processes execute efficiently and in these situations, their cooperative nature is utilized for increasing computational speed, convenience, and modularity. In this mechanism, processes are allowed to communicate with each other. Communication is seen as a method of cooperation between them.