Learning a first programming language is always special for everyone. We get attached to it and it sticks with us forever. You might have 10 years old, 12 years old, 15 years old or whatever your age was, we are sure it was definitely special for you and it will be in the future as well. After all, you put so many efforts and you experienced a lot of pain in making your first program or debugging a simple syntax error but once you saw your code run successfully and you got your desired output on the screen, you smiled, you were excited, you forgot all your pain and you realized that you can become a good coder and move to the next step. 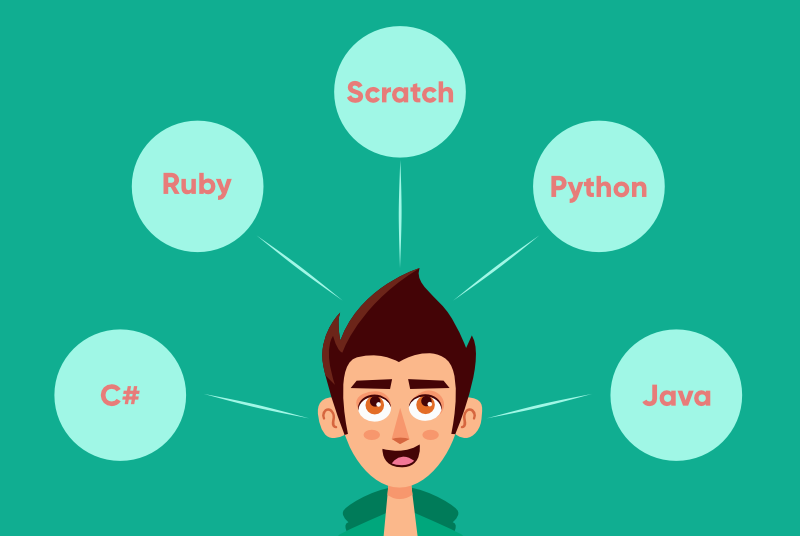 Learning programming in a different era, at different age is completely different. Today programming has become fairly simple to learn. So many easy to pick languages are there for kids. Their syntax is easy to learn and kids can easily build the fundamentals of coding concepts to apply their knowledge practically in creating some amazing games or websites. Teaching programming to the kids helps in building other skills as well. They become good in mathematics, reading and develop good problem solving and analytical reasoning skills.
We are going to discuss some programming languages that kids can pick up and start with it but keep in mind that picking up one of these languages should be different for the different age groups. It should be according to their age, interests and definitely their ability to grasp the concepts.

Kids between the age of 8 to 16 are generally interested in stories, arts, music, animations, games and what could be the best thing for them if they can create these amazing things on their own. Scratch makes it possible which is best suited for younger children and available online for free. If your kid is not a solid typist then this language is best for them to start with. The platform provides easy to use block interface it means kids can simply drag and drop code blocks to animate characters, create games, and build apps.
You will also find a big online community supporting scratch with over 15 million registered users all over the world. Scratch platform and its community also allow you to store your projects and their code on the Scratch server. Scratch server which allows your kid to study how complex games are created by advanced users. You can get scratch from https://scratch.mit.edu.

Python is one of the most popular and easiest programming languages in the world which is not just the choice of young coders but also the best option for experienced programmers. Python syntax is like a regular English language where you don’t need to add comments to the code. Python code is well enough to explain everything to its reader so kids won’t face any difficulty in understanding its syntax. Python is popular and widely used in the scientific field, Artificial Intelligence, cybersecurity and lots of other areas so kids interested in these area can choose this language.
A lot of common functionalities are already built into this language. Someone can achieve a lot of things by simply using Python core libraries in their code while building any application. These all are the reason Python is best for kids to learn. If your kid is picking up this language then he/she can transform the ideas into the code and run it in little time. This language helps kids a lot in getting a basic grasp on how to think like a programmer. Python has also a huge community focused on using it in computer education.

Ruby is also one of the easiest languages to use and its syntax is like normal English speech. So just like in python Ruby’s syntax is self-explanatory so it takes less time to explain the code to kids. It’s readable and clear syntax makes coding easier for children. Ruby is a natural, robust, consistent and easy to remember language and these great features help kids to learn the concepts and use it practically writing good scripts. Ruby has also integrated with the object-oriented programming concept.
There is one limitation using this language. This language is good for desktop application but for a web application, someone has to learn Ruby on Rails which introduces more complex concepts and not good for beginners to start with.

Java is one of the most widely used programming languages to learn but frankly speaking it’s not a favorite programming language for kids and good for intermediate coders. Java is a bit harder than Python or Ruby but kids who are interested in making android applications or game engines and want a deep understanding of coding can pick up this language.
There is a popular game Minecraft that runs on java attracted kids to learn this language. While playing this game student understand the java principle, they learn how to use logic and solve the problems. Java has statically typed language so you need to write code for everything using this language and that requires a lot of patience in kids so choose this language wisely for your kid.

If your kid is interested in making 3D games (like Unity) or applications for windows then this language is the best to start with. C# is one of the most in-demand languages for jobs in companies and its syntax is similar to Java so learning one of these languages becomes easier if you have worked with the other one. C# has rich class libraries, strong memory backup, automatic garbage collection and also support from .NET. C# is the best choice for developers if they want to create windows desktop application.