13 Technical Skills You Should Have As A Developer

If you are a computer science student or doing a course to become a software engineer or a software developer, there are some technical skills you need to have to become a good programmer. Technology is vast and there are so many tools, platforms, languages coming out in the market. It doesn’t matter if you are an experienced programmer or a newbie programmer, as a modern developer you should have knowledge that how to integrate the modern technologies and other technical stuff in your work to make a good product or software.

In this article, we will discuss some important technical skills you should have as a developer or if you are planning to become a good developer.

1. Data Structures and Algorithms: This skill is the topmost priority by most of the companies to check the problem solving and coding skill. You can become a good software developer if you know how data can be organized and how it can be used to solve a real life problem. As a developer or a computer science student or a self taught programmer, you should put serious effort to learn Data Structures and Algorithms(e.g. array, linked list, tree). Data Structures and Algorithms are the heart of programming. Initially most of the developers do not realize its importance but when you will start your career in software development, you will find your code is either taking too much time or taking too much space. There you will realize the importance of organizing the data using right data structure and algorithm to solve a specific problem in less time and less space. Some of the website where you can learn and practice this skill are GeeksforGeeks, Hackerrank, Codechef, CareerCup, LeetCode, InterviewBit, HackerEarth etc. 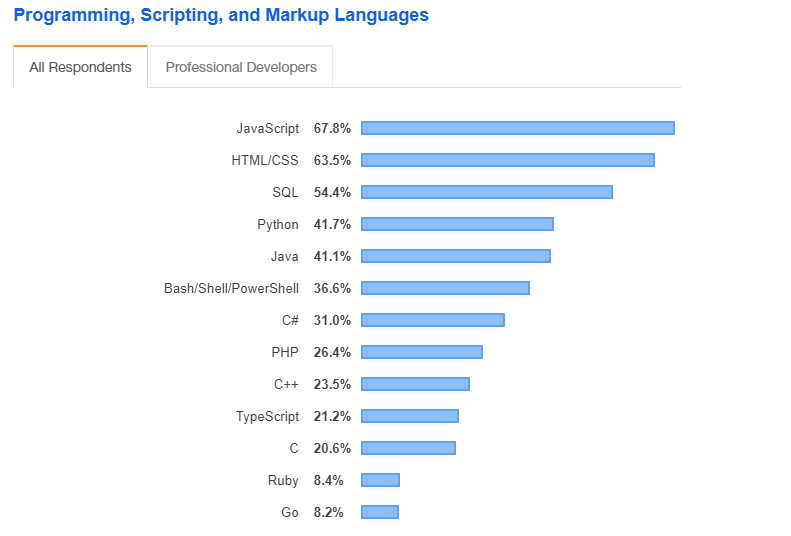 3. Source Control: Source control helps the developer in managing and storing their code. Today most of the organization is looking for a developer who is proficient in version control and collaborate with other team members. So if your plan is to become a good software developer you need to be comfortable with version control concepts and tools like Git (preferred by 70-80% organization), Mercurial, SVN, etc. Go through this article to learn more about source control Git and Github

4. Text Editors: It doesn’t matter you are a beginner, intermediate or expert level programmer. Every programmer’s programming journey start from text editors. It is an essential tool of programmers daily life. Not only programmers even non-programmers also use text editors for their own purpose. There are a lot of text editors available like Notepad++, Sublime Text, Atom, Brackets, Visual code,, etc. Every programmer especially beginner should spend some time in a learning text editor and some keyboard shortcut to becoming a smart and productive developer.

5. IDEs (Integrated Development Environment): IDEs allows you to write, modify, compile, run and debug your code. When it comes to choosing the best development environment, different programmers have different choice for different purpose or language they are working on. Every programmer should know how to use IDEs to write, compile, run and debug their code. Using an IDE speed up their work and there are so many IDEs available for developers. For C, C++ and C# programmers most recommended choice is Visual Studio or Code::Blocks. For Python developers, PyCharm, Spyder or Jupyter notebook is also getting popularity. For Java Eclipse, NetBeans and IntelliJ IDEA is the best choice for developers.

6. Databases: An essential skill for developers is understanding of working with databases. Developers should know all kind of operation like how to store records, create, insert, update, delete, etc. Creating any kind of application and software is impossible for any organization without the database. When a developer work on any serious business project they also need to take care of security issue and managing the complete organization record with proper backup and that’s the reason every organization expects a developer comfortable in working with databases and managing the complete records securely. There is no doubt that SQL is the most popular classic database among developers. If you want to become a good developer you need to be good in writing at least basic SQL queries. Oracle, PostgreSQL, MongoDB, Cassandra, Redis, etc. are the databases you can work with.

7. Operating System: A serious software developer should know the fundamentals and mechanism of the operating system. When a developer work on a project they deal with so many issues related with an operating system like memory usage, communicating with another machine, running a program very slow, tools conflicting issues, blocking issues, etc. When a developer writes code on one machine and that doesn’t work on another machine then it can create a serious issue during the production level. So its good to have good knowledge of process and mechanism of the operating system you are going to work with. Most of the programmers prefer working on Linux, Windows machine or Mac. Android and iOS is the best example of mobile and tablet operating system.

8. Networking Basics: In 70-80% cases developers work or application is based on the client-server model, where the request goes through the network to a server and client can be based anywhere in the world to access the application. Understanding of basic networking is important for developers to develop and support an application. If the architecture wouldn’t be designed properly it can create HTTP request issue over the network. In a client-server architecture, a user or a client POST request via the internet which is received by the server and after processing data request the response is sent back to the client. Today in most of the application like web-based, online games, business automation or cloud computing client-server architecture is used. So we can not deny this fact that fundamentals and basics of networking are also an essential skill for the developer before they enter into programming.

9. Basics of Testing: Before releasing software in the market there are so many test cases a software or an application has to pass. Testing is an important step to find out all kind of bug and to check if the software is ready to hand over to the customer or not. There are so many test methods but a developer should have knowledge of three important testing methods. First one is Unit Testing in which each and every individual module or class is tested properly. There are so many unit testing frameworks available like NUnit for C#, JUnit for Java, Embunit for C or C++. Another testing is Integration Testing where a developer has to test the interaction between different blocks or modules. This test helps to exclude the incorrect processing of data. The last testing is System Testing where the test is conducted on complete and integrated software. It falls under the black box testing technique where it doesn’t require internal knowledge of the code.

10. Cross-Platform Software: When a product is designed or developed it is expected to run on multiple platforms like Windows, Mac, Linux, etc. In a simple language cross platform allows you to write code once and that is shared across different platforms. It is important for a developer to make a product which can be accepted by the maximum number of systems because today most of the users are switching to the mobile devices or smartphones to use the product or services. The number of customers can be increased eventually when the software is adapted to the maximum number of devices. If you are a beginner or experienced level programmer, you should have knowledge about working with cross-platform software for better career opportunity and growth in software development.

11. Encryption and Cryptography: When it comes to making a web application or software which uses sensitive information of a user, it is important for a developer to implement a secure and encrypted key to prevent all kind of attacks. Security of users sensitive information, preventing a site from hacking is the major concern for every organization when it comes to making a product or software. It is expected from a developer to know about how encryption algorithms work, how authentication works and how cryptography methods work. There are mainly two methods used for data encryption. These are public key and private key. A key is established with public key encryption algorithms such as RSA or ECDSA and its depend on developer which one he/she wants to choose to keep in mind about the overall security of the network. Cryptography helps the developer to make a secure system, secure database and helps in transmitting secure output over the network after processing the request. It is also used in secure error handling and allows using third party libraries without worrying about the security issue.

12. SDLC (Software development life cycle): SDLC is a step by step systematic process to develop a software ensuring its quality and correctness. If you are planning to become a software developer you should have knowledge about the proper life cycle of software from requirement analysis to maintenance of the product. There are mainly 7 phases in SDLC.

When you enter programming each and every phase is important during the development of a software or an application. A developer is expected to use his brain on every stage of SDLC and follow the proper flow to make a good product. It also helps the developer to take precautions at an early stage before any kind of issue they have to deal at the next step.

13. Microsoft Excel: A developer has to do nothing with Microsoft Excel when it comes to doing coding or implementing software, but still, it is an essential skill for them because it helps to track progress, data analysis, data quality check, maintenance of data and definitely for project planning. We can not underestimate the use of Excel. Its use is much more than spreadsheet which helps the developer to make their work easy and it also helps to speed up their work using its functions like searching, sorting, filtering or for any kind of mathematical operation. Microsoft Excel is also used widely to insert bulk data in databases. This tool is an essential part of a project for a junior level developer to a manager. So its good to spend some time learning the basic functions of Excel.

Previous
7 Most In-Demand Technical Skills By Companies After COVID-19
Next
An Ultimate Guide to Git and Github
Related Articles
1. 5 Must-Have Skills You'll Need In Your Hackathon Team
2. Skills You Must Have For FAANG Companies
3. Top 5 Skills You Must Know Before You Learn ReactJS
4. 7 Most In-Demand Technical Skills By Companies After COVID-19
5. Technical Documentation - Types, Required Skills, Challenges
6. 7 Key Technical Skills For Your Resume
7. 8 Must-Have Skills for Becoming an Android App Developer
8. Must Have Skills For React Native Developer
9. Which language should you learn first if you want to make an app?
10. 13 Things You Should Know Before You Enter In Web Development
Article Contributed By :