How many of you are scared of listening to this technical jargon of computer science concepts???

How many of you think that learning these concepts is not a cup of my tea and it’s quite confusing to grasp, differentiate, or explain all of them??? 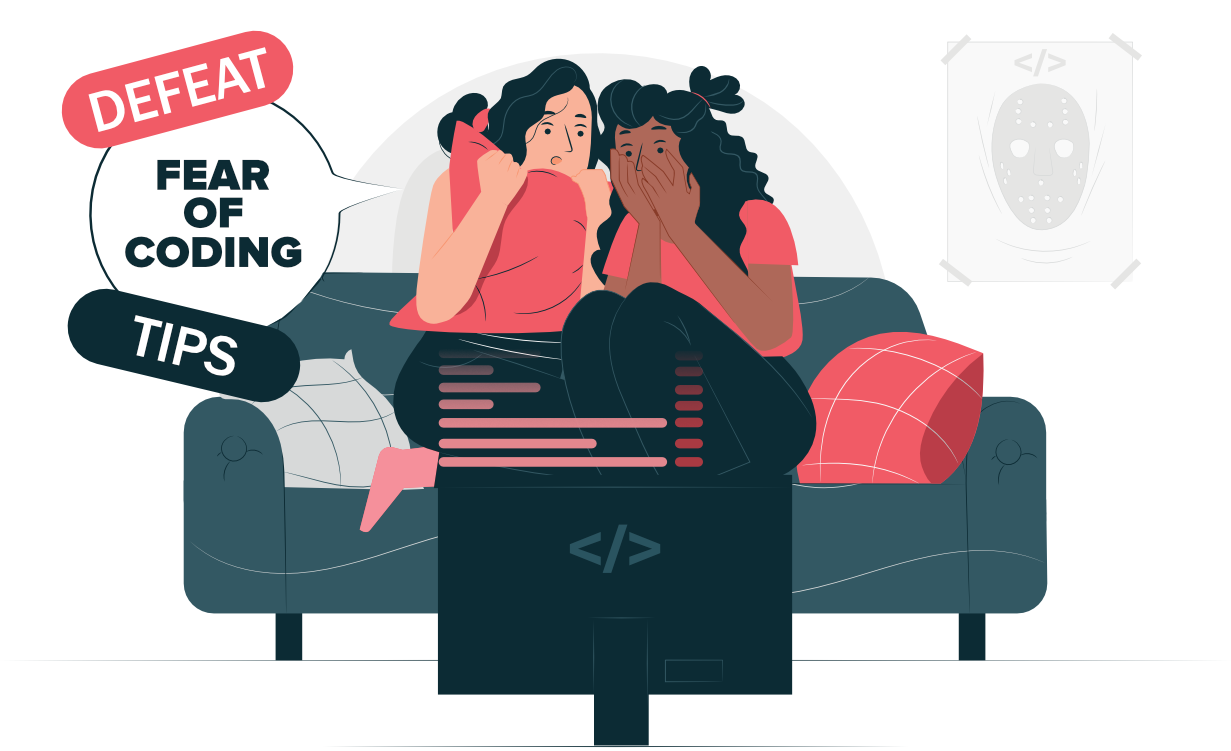 A lot of people are afraid of coding or the idea of learning to code when they listen to all the technical terminology in computer science. As a beginner, if you have jumped into the coding, a few lines of code on your screen appear to be a foreign language and you start thinking that understanding these lines is not the cup of my tea.

Why do you fear to code? Is it because you’re afraid to mess up or break something? is it because the technical concepts are confusing for you? is it because of so many overwhelming concepts in programming? Whatever your answer is…but, the most pleasurable thing for a programmer is the moment when they see their code run in the blink of an eye and the magic happens on the screen.

Coding is intimidating, coding is overwhelming but if anyone defeats the fear of coding then it’s also one of the most enjoyable and fun things to do. Some people who enjoy coding get addicted to it and they start spending hours either trying different programming strategies or building the new applications, or solving some coding-related challenging problems. In this blog, we will discuss the top reasons why people fear of coding and tips to overcome this problem.

3 Main Reasons Why People Are Afraid of Coding

1. People Think Learning to Code is Difficult And They Are Not Meant to Code

A lot of people think that learning to code is too difficult, and they are not meant to code because all the technical jargon/programming terminologies just go over on their heads.  When it comes to code many people are unable to implement the logic for the problems, and they start doubting their abilities. When this happens they give up on coding very soon. Well, coding is intimidating at first but once you understand the fundamental concepts and keep practicing it, it becomes easy to grasp everything in programming. Think about the command-line interface. For any beginner, it is scary at first but once you start working on it and start practicing it every day, you eventually get it.

A lot of beginners presume that they will fail in programming before they step into the coding world. When a newbie programmer sees a lot of concepts in coding it becomes overwhelming for them. They start having self-doubt, and they let some negative thoughts come to their mind. These negative thoughts affect their mindset which results in creating the belief that learning to code is difficult. Later they do not show the courage to move further and jump into the coding world.

3. Thinking That It’s Too Late to Learn

Some people start learning to code at the age of 10, some at 13, some at 20, and some of them at 30. Some people compare themselves and think that they’re too old to learn. But the truth is programming is a never-ending skill that you need to develop. Anyone can learn this skill at any age, and utilize this skill to apply for some jobs, doing freelancing or creating some application to start their own business.

10 Tips to Overcome The Fear of Coding

Before we discuss the tips to overcome, you need to understand that learning to code is just like learning a new foreign language. If you visit a new country and you need to speak with the citizens of that country you will have to learn a new language. It can be French or Spanish or anything. A similar thing happens in coding. In programming, you need to choose and learn a programming language to speak to your computers.  Just like languages have different rules to describe past, present, and future, programming languages have also different rules for various cases.

The above tip is the most important tip for every programmer. Let’s discuss some other common tips to overcome the fear of coding.

When a newbie programmer doesn’t find the right resources to learn, things become quite confusing for them in programming. They do not understand the concept well and later it becomes difficult for them to implement anything in coding. So the first thing to do is to find some right resources to learn. It can be a book, tutorial, blog, or any video/YouTube channel. A good resource gives you the right training and teaches you the best practices in coding. If you are a newbie programmer then find some beginner-friendly resources to understand everything from scratch.

2. Start Learning Without Worrying Too Much

As soon as you get some good resources, start learning the concepts from scratch without worrying too much. Sometimes we overthink and we do over-research on some topics or programming languages. Having decent research is fair enough but you don’t need to think too much that if you have chosen the right language or the right technology or not. Concepts remain the same in most languages so better to start learning a language you encounter first. Start working on the fundamentals and start building some simple applications with your newly acquired language. Slowly go into a deeper understanding of the language and increase the level of complexity of the project.

You don’t need to make a big shot and think about creating a big gigantic website in the initial phase of your learning. We know that it is quite inspirational to see some beautiful websites and think about building that one when you step into the coding world. But you will be lost in a lot of concepts and later things can become frustrating for you if you won’t be able to fulfill your expectations to build something. Remember that Facebook, Twitter, or Instagram wasn’t built in a day. It took years and it all started with small contributions.

Also, stop believing that people who are good to code they are only meant to code because they can build any big or gigantic website. Reality is they also started small and you should do that too. So stop believing that you’ll have to start big with all guns blazing. Start small and keep going on in this journey.

The best way of learning to code and building confidence in yourself is to build some actual projects. Instead of just sticking to solving some coding puzzles and watching some online video tutorials, get your hands dirty in building some projects.  It doesn’t matter if you’re starting with a simple static website or a game, the idea is to apply the knowledge you have acquired and see how things come together in an application. How all the programming terminologies or concepts work together in actual projects and how the magic happens on your screen.

Later you will find that you have started playing with your code and you’re understanding the concepts more easily and deeply. You will start getting the whole picture of your application and you will also learn planning, debugging, and various other things in coding.

5. Master One Programming Language Before Jumping Into The Another Language

The most common mistake that every newbie programmer make is jumping from one programming language to another one without really understanding the basics of one. Thinking that you should know various programming languages to learn to code is the most foolish mistake anyone can make. From C++ to Java to Python, jumping to these languages one by one without mastering a single one won’t help you to learn to code. You will be confused, overwhelmed, frustrated and you will waste a lot of time in it.

You don’t need to start with the hottest framework or language just because everyone else is using it and it’s quite popular in the tech industry. Start with one language you are comfortable with, stick with it, and don’t jump into the new one until you’re comfortable to build something with the language you have chosen to learn. We are also not saying that you need to know 100% concepts of a programming language. Once you cover at least 70-75% of a programming language, you can jump to another one. Because mastering a single programming language takes years to achieve and in this technical era everything is changing very rapidly so you need to be fast enough to adapt the things.

6. Enjoy The Process Without Worrying About The Big Picture

This one is the most important tip for beginners in coding. Instead of thinking too much about the result, they should enjoy the journey of learning to code and trust the process they are following to succeed. Many times it will happen that you won’t understand a few concepts in coding. Instead of worrying about it, take your time, focus on your learning journey, don’t rush, and don’t be intimidated with the things you don’t understand. During your learning process, you will understand best practices, debugging skills, refactoring the code, and a lot of other things. So focus on enjoying all these things in your coding journey and stop worrying about the big picture.

7. Learn the Art of “Googling”

Cheating in programming and googling the things is completely acceptable. Even the best programmers take the help of Google and surprisingly they know the art of ‘googling’ the stuff.  Google is the best friend of programmers and a good programmer knows how to search a specific problem to get the quick and right solution. They know what they need to explain to Google. Google gives a lot of solutions through various sites, blog posts, or through some programming community such as StackOverflow, Quora, and Reddit. The Best programmers learn a lot of things googling a lot of stuff and from these websites. A smart coder always takes the help of Google to solve the problems and to enhance his/her skill set. So if you’re confused about a concept or if you get stuck in coding just ‘Google’ it.

8. Break Your Code Into Smaller Chunks

Instead of solving a large big complex problem in one go, break down the problem into smaller chunks and solve each one of them one by one. This way not only you make things easier for yourself but also understand what each code is doing in your code. Sometimes it becomes difficult for beginners to solve a big problem, and they don’t understand where to start. This tip is very useful for them when they are solving a large complex problem. Even while working with a team, this approach is followed by the team members to build some big projects.

9. Teach Others to Code

This one is the best way to learn a concept deeply in coding. When you teach others you learn more and you eventually teach yourself. You need to have a good grasp of a concept before you explain it to the others. You dig yourself into the topic and you clear all your doubts related to the topic. To teach others you can write some blogs or you can make some video/tutorials.

10. Code Every Day and Keep Learning

Good programmers never stop learning the programming stuff. Every day, a new framework or some technical stuff is out there in the market. Things are competitive, so programmers need to adapt to the things and move to newer technology. This way you keep sharpening your skillset, you build confidence, you avoid getting stuck at one technology and you create value for yourself in the tech industry all the time.