10 Skills Java Programmers Can Learn in 2022

As we all know, with the change of technology, the world of digitalization is getting smoother day by day. Talking about Java, the language has drastically evolved in the past few years. Now the point is what kind of skills an individual should hold in the upcoming year so that he/she is not out of trend in the Java world. This article will drive you with the 10 best skills that Java Programmers can learn in 2022. Now, before we move ahead, let’s get to know about this eminent language, Java. The most famous and old-school language was developed by Sun Microsystems in 1996. Today, it holds more than 8 million developers throughout the globe. 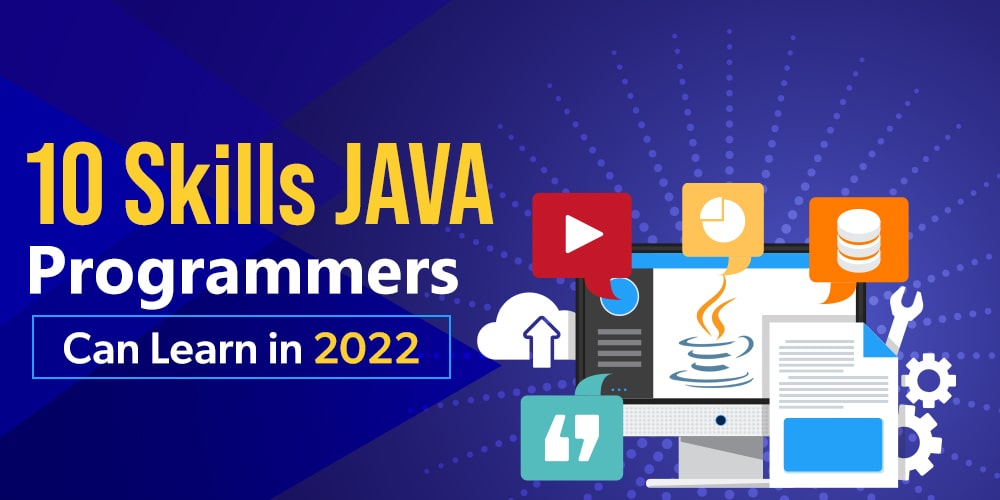 Java is primarily being used to create applications of different domains including web applications, mobile applications, etc. The language is being used by various renowned tech giants like Adobe, Amazon, etc. and these companies offer remarkable career opportunities to Java Professionals regularly. Java has been around for a long time, but it has also undergone substantial changes in recent years.

Now, let’s discuss the 10 best skills that Java Programmers can opt to learn in the year 2022:

The term “cloud” is commonly used to refer to software or services that are accessed over the internet. And, in a similar context, Cloud computing is internet-based computing that delivers shared processing resources and data to computers and other devices on demand. When you check your email or search the internet as a regular user, you take advantage of a few cloud capabilities. In these situations, processing technology is used in remote locations and is unknown to the users. There are numerous other instances, such as Dropbox storage, Google Drive – all of this is made possible by the cloud.

As per the reports, a huge number of organizations spend nearly 33% portion of their tech budget on Cloud Services. Hence, Java Developers (and other developers as well) are strongly recommended to make themselves familiar with Cloud Computing and preferred Cloud Platforms like AWS, GCP, Azure, etc.

Java microservices are a collection of small-scale software applications implemented in the Java programming language that work together to generate a larger solution. Its architecture is similar to a factory assembly line, with each microservice serving as a station along the line. Microservices are becoming more common in the software development world as developers strive to build larger, more efficient software that can be better built and managed as a collection of smaller services that work together to provide greater, application-wide capabilities. The best part about microservices is you can simply align a complex application with these small-scale individual programs.

It was first introduced in 2005 by Linus Torvalds to develop Linux Kernel. Git is an open-source distributed version control system tool that can handle everything from small to large projects with ease. Most organizations and individuals want the functionality, performance, security, and flexibility that Git provides. It’s also a useful DevOps tool for distributed version control. In case, you don’t know Git is the base of many services by which we might be well aware of such as Github and GitLab and the best part about Git is, we can use it any day without having Git services in both public and private aspects because of it’s GPL license. It is considered as the best when it comes to scaling the team as it can easily take the load of users and yet it provides a “clone” feature for their users by which if needed, the entire project can be distributed to another machine using this feature.

Also known as Service Orientation Architecture, can be defined as an approach of reusing software components through service interfaces. These interfaces make use of common communication protocols to allow them to be quickly integrated into new applications without requiring extensive integration each time. The service interfaces can be called without knowing how the integration is done. Standard network protocols, such as SOAP (Simple Object Access Protocol), are used to deliver requests to read or change data to the services. The services are released in a form that makes it easy for developers to identify and reuse them in new applications. With the help of SOA, it becomes easy to manage the complexity of the project.

It’s an open-source platform that is being used to Create-> Run-> Deploy applications with the help of containers. Whereas containers allow simplicity in delivering applications and have also gained popularity among firms for adopting cloud and hybrid environments. Docker makes it easy to fetch readymade images and this will not only save your time but also it will be helpful while creating Java applications and hence, that pre-made images can be placed from Docker Hub. The best part about using Docker with Java is its availability, in short, you can install Docker via cloud whereas it is helpful for most of the users as they provide container-based service.

It’s an open-source real-time distributed engine. The best part about Elasticsearch is that it can accept data from any source and in any format based on the Apache Lucene library. Its decentralized architecture allows it to search and analyze massive amounts of data in real-time. Running a full-featured search cluster with Elasticsearch is simple, but scaling it needs a significant amount of experience. Elasticsearch is frequently used for storing data that needs to be sliced and diced, aggregated by various dimensions, and so on, in addition to full-text search-oriented use cases like product search, document search, email search, and so on. Elasticsearch for metrics, logs, traces, and other time-series data are examples of such analytical use cases.

It’s an open-source framework for testing in Java for programmers. JUnit is designed for both beginners and professionals, and developers can write and run multiple tests, and the best part is developers can create their own test cases. It was created by Erich Gamma and Kent Beck in the ’90s. It is being widely used among geeks and a survey that happened back in 2013 signified that among 10,000 projects, JUnit was mostly used for execution.

SQL stands for Structured Query Language, is a database language that was introduced in the ’70s for database management. Through SQL, a user can manipulate and retrieve data stored in a relational database. For any data to insert, delete, modify or create, SQL is being used. The base is, SQL is a query language, not a DB system. SQL is mainly used by professionals for handling data in the relational database management system. SQL became ANSI (American National Standards Institute) in 1986 and was certified by ISO in 1987.

Hibernate is a popular Java framework that is  commonly being used to simplify the Java application development to interact with the database. It is an Object-Relational Mapping (ORM) tool for Java and effectively supports various standard RDBMS including HSQL Database Engine, Oracle, MySQL, etc. Some of the prominent features of Hibernate are: highly scalable, database-independent, open-source, and many others. Without any doubt, it overcomes various significant limitations of JDBC. Having proficiency with Hibernate can surely get you some worthwhile career opportunities as a Java professional.

Well, you see, that are probably the best skills that a Java programmer can learn today if they want to uplift their career in 2022. You might be familiar with some of them, but trust us on this, these skillsets are in high trends for Java developers. Besides the fact, you aren’t supposed to learn each one of them, all you need is just a solid command over some of them, and based on your taste and interest, you are good to go for a bright future!