10 of the Weirdest Tech Inventions in the World

There are many new tech inventions created in the world all the time. Some of these are extremely useful and become popular very fast while others are more experimental in nature. And then there are some inventions that sound very weird in the sense that we could never have imagined them ourselves! But can be extremely useful for society. Consider a fitness band powered by sweat! It sounds quite weird but it might encourage independence from charging and eventually a reduction in power usage (which the environment will thank us for!) There are many other such weird tech inventions in the world that you can learn about. 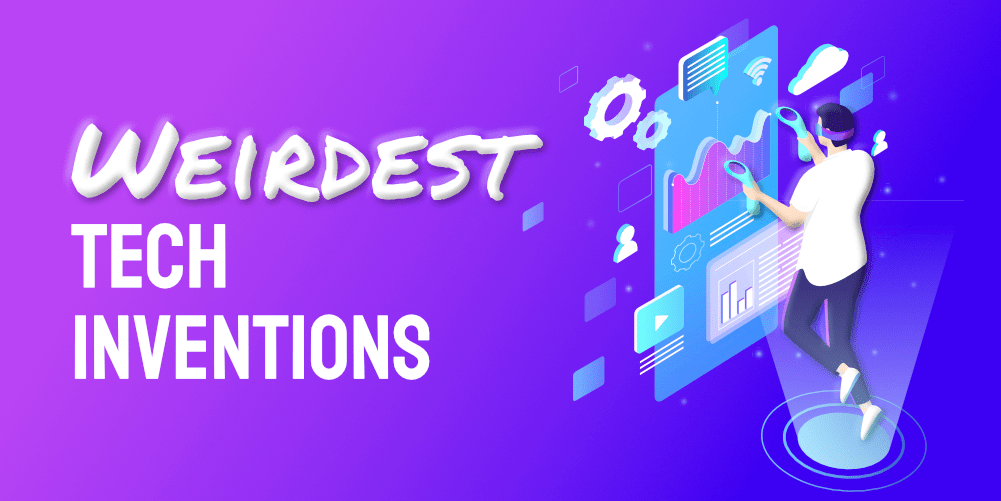 Some of these are actually quite useful and some were made just for fun and are obviously not going to work out in the long run! But whatever there uses, do check out these tech inventions that sound like they are more science fiction than reality.

You know the bricks that are commonly used to create houses and are manufactured in millions each year? Well, scientists may have found a way to store energy into those common bricks using a conductive polymer called PEDOT. After treatment of normal bricks, they contain a network of tiny, conductive PEDOT fibers that can light a LED for about 10 minutes straight. They can also be charged 10,000 times with less than a 10% loss in storage capacity. These bricks are still in a development phase but if scientists are able to stabilize enough to create houses with them, then we could be changing our phone straight through the wall!

There are some times when we urgently need to write something down but there is no paper. Then we run around the house finding some pen and paper, so we can note that down! But what if we don’t need paper? Now there are electronic sensor pens that you can use to write on virtually any surface like the table, a cushion, or even your hand! One example of this is the OTM technologies Phree which allows you to write on any surface and the 3D optical tracking engine copies the motion to show the writing on a connected Bluetooth device like a phone, tablet, laptop, etc. So next time you can’t find any paper, don’t worry. Just write on the table instead!

Next time you need to use binoculars, use can just use contact lenses instead! These zoomable contact lenses are designed such that they can zoom if you blink twice. They have embedded sensors that measure the electrooculographic signals eye pupils make when they move left, right, top, or down. And they can react to these signals by zooming or going back to normal on command. These contact lenses have many applications in the future such as automatically adjustable glasses, visual prosthetics, etc. And now you can say that you can change your view literally in the blink of an eye!

Smartphones are pretty common these days, but they usually tend to have only one screen. Not this phone! This is a 3 sided flip phone that is created like a triangle with 3 sides. Apart from functioning as a flower vase, you can use this phone for multitasking. For example, you could use it as a hands-free video chatting device or read a book. And if you don’t prefer a 3D model and would like to go back to the old single-screen style, you can collapse one of the screens of this phone so that it appears like a normal smartphone.

If you live in cities in New York, Shanghai, New Delhi, etc. you know that the traffic is insane! You might take 3 hours to get somewhere which is actually only 1 hour away. So what the solution to this crazy traffic problem? It’s flying taxis of course! With no place left on the roads, it might be the best idea to travel by air from one place to another. We already do this for long distances, but now it might be necessary (and faster!) for 10-15 km as well. There are many companies that are working on creating smart taxis and are in development and testing phases right now such as EHang in China, Vertical Aerospace in Britain, Volocopter in Germany, etc.

It might sound creepy to have small nanometer robots in your body, but it might become a reality by 2030! These nanobots have many applications in medicine and their small size of around 1 to 100 nanometers makes it impossible to feel if are there. They can be used as a replacement for blood cells that can carry oxygen throughout the body. Since these nanobots are even smaller than an actual red blood cell, that won’t even be a problem! And they can be used to create artificial blood replacement fluids that can be used in emergency first aid, blood transfusions, etc. Nanobots can also be used as a replacement for white blood cells and currently, scientists are looking into their usefulness to combat cancer by destroying cancerous cells s they are created in the body.

Guide dogs are important companions for the blind, but there are some people that cannot afford or house a dog because of some reasons. In that situation, the best alternative they could have is a robotic guide dog! These robotic dogs can fulfill all the functions of a real dog and also program the fastest and safest routes from one place to another for the blond. If there are any high-risk areas such as very busy roads, then the Robot dog also has a manual mode where people can use it as a crane. And the best thing is that it is called ‘Theia’ after the ancient Greek Titan goddess of sight.

There are a wide variety of smartphones on the market but there is one thing they all have in common, they are rigid. You cannot exactly twist and roll your smartphone into different shapes. But that’s about to change. Many companies, including Samsung, are working on rollable phones that look like smartphones but you can open them into a screen double that size as a tablet. Who knows, maybe tablets may become obsolete in the future because smartphones will fulfill that function.

Everyone knows about smart-watches and many of you might even own one. But have you ever heard of a smartwatch that can work with sweat? Scientists at the University of Glasgow in Scotland have created technology to generate electricity from the ions in your sweat. This can be used to charge electric devices and would work best with fitness wearables like Fitbit because you are mostly sweating when using them. While this tech is still in the development stage and may require supplementation from traditional charging methods, it is still a great idea for reducing power usage. And who knows, you might be using sweat watches instead of smartwatches in the future!

Heart diseases are one of the major causes of death all over the world. People who already have heart complications need to be extremely careful so that they don’t trigger any further problems. While there are many heartbeat tracking applications in smartwatches and fitness devices, these are not always accurate. But a new T-Shirt can solve this problem! KYMIRA, a smart clothing company, has created a smart T-Shirt that has a single lead ECG built into it. It can transfer the heart rate to any device using Bluetooth which can catch serious heart problems like arrhythmia or cardiac arrest fast enough to save lives.

There are many many many….more tech inventions in the world that can be qualified as weird. Maybe they are just weird because they sound unrealistic but may become pretty common by 2050! And some of them are actually very useful and can save lives like healing nanobots, heart monitoring clothing, and robotic guide dogs. Whatever their applications, let’s see how these turn out in the future and whether they become commonplace or not.

Previous
Amazon WoW Program
Next
Resolution Days 2021 - Step Into a New You This Year!
Related Articles
1. Top 5 Tech Giants in the World
2. 7 Tech Trends Expected to Rule in the Post-Covid World
3. Contributions of the LGBTQ+ Community in Tech World
4. [TopTalent.in] How Tech companies Like Their Résumés
5. How are Tech Companies Helping Fight COVID-19?
6. 10 Tech Devices that help People with Disabilities
7. What is Artificial Intelligence as a Service (AIaaS) in the Tech Industry?
8. What is Data as a Service (DaaS) in the Tech Industry?
9. Career Opportunities for B.Tech Graduates in Defense Forces
10. Want to Become an Android Developer - Learn these 5 Tech Skills!
Article Contributed By :