” NASA has landed robots on Mars, and some developers are still struggling with the center alignments of the divs in their website”
This joke has a lot of truth in it. Making a beautiful website that looks good on every browser is not an easy thing for UI/UX designers. Developers have to consider all the web browsers and mobile views when it comes to creating a layout for a website and making it beautiful. Fear always remains inside that what if the design will break horribly on some stupid browser somewhere! Thanks to the CSS frameworks that have made the developer’s life infinitely easier. CSS frameworks took most of the pain away and today developers can’t imagine code without a CSS framework. These frameworks not just save a lot of time but also helps in building a beautiful responsive web application in a better and faster way. 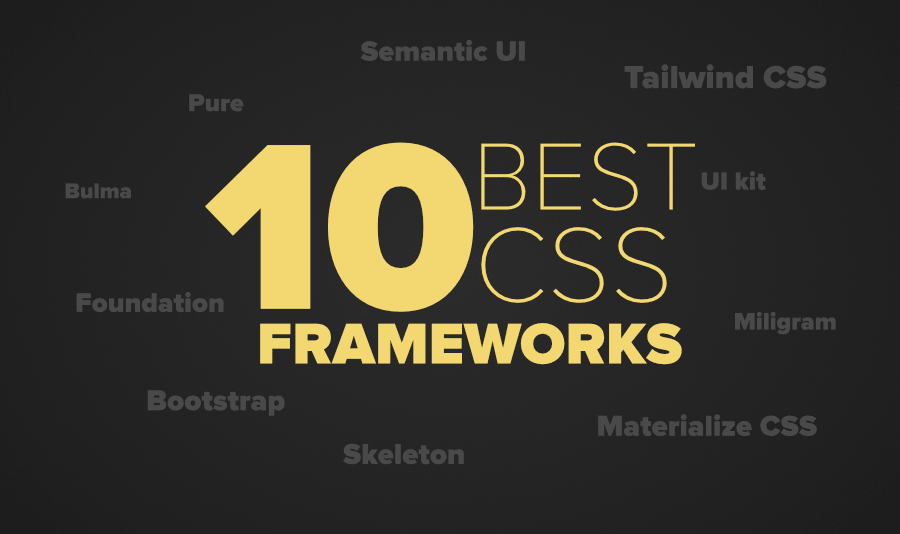 These frameworks give basic structure, which includes grid, interactive UI patterns, web typography, tooltips, buttons, form elements, icons. Ready to use solutions are available and this helps in building the website quickly. You don’t need to start everything from scratch and you can reuse the code in your project.
Now there is a question that which framework is best for you? If you’re new to front-end development, then picking a framework can be a little bit tricky. To be very honest, every CSS framework has some pros and cons so, it depends on your specific needs. In this article, we will discuss some popular CSS frameworks that work for most of the developers in industries. We have filtered out these frameworks keeping in mind their pros and cons. Let’s discuss these frameworks.

You might have definitely heard of this framework even if it’s your first on the job. This framework was the first framework to promote the philosophy of “smartphone-first.” Bootstrap is the most popular CSS framework in the world and it was introduced by Twitter in 2011. Bootstrap helps a lot in building a responsive design on a large scale. When you include the relevant bootstrap classes it automatically adjusts the design for different screen sizes. It provides plenty of plugins and theme builder. The current version of this framework is Bootstrap 4 which includes some more features such as new color schemes, new modifiers, new utility classes. Version 4 is built with SASS, and that means Bootstrap has now supported both LESS and SASS.

Developers say that if programming were a religion Foundation and Bootstrap guys would be on opposite sides of the barricades. Foundation is another superb most widely used CSS framework in the world. It is used by many companies such as Facebook, eBay, Mozilla, Adobe, and even Disney. The framework is built on Saas like bootstrap. It is more sophisticated, flexible, and easily customizable. It also comes with CLI, so it’s easy to use it with module bundlers. It offers the Fastclick.js tool for faster rendering on mobile devices.

Bulma is a relatively new framework in the market in comparison to other CSS frameworks but Bulma managed to gain a lot of attention from the users within a short period of time. This free and open-source CSS framework is based on the Flexbox layout model. the best thing is that it is solely based on CSS and it doesn’t require javascript at all. It is used by more than 200, 000 developers around the world. It is responsive, lightweight, and also follows the ‘mobile-first’ approach.

Developed by Yahoo, Pure is a lightweight and responsive CSS framework. It is built using Normalize.css that helps in creating responsive layouts using grids and menus. It can be broken into different CSS modules and depending on your needs and preference you can import those modules. So, if you need only the grid system, there’s no need to import the entire CSS and add to the site’s load time. Unlike Bootstrap, it doesn’t allow creating fixed layouts.

This framework is popularly known for its incredible thematic effects as well as it’s simple and elegant designs. Semantic UI is a responsive framework that uses human-friendly HTML and it allows you to create a unique and beautiful website without multiple changes. It offers 3000+ Theming Variables and 50+ UI Components. It also supports third-party libraries like React, Meteor, Ember, React, and more.

Tailwind CSS is a low-level CSS framework that is flexible and highly customizable. Tailwind is written in PostCSS and configured in JavaScript. Instead of using prebuilt components, you will be using low-level utility classes to customize your design, and that gives you full control over how the site ends up. From front size to spacing, breakpoints to shadows, color to border size all are customizable. For example, you can give Pill, outline, and 3D look to the Button. You can personalize each aspect and you can create a design in a unique style that definitely looks different than the other frameworks like Bootstrap or UI kit.

This powerful CSS framework is known for its feature of minimalism. UI Kit is a lightweight minimal CSS framework that includes almost all the features of other frameworks. You can create super-clean, elegant, and beautiful web interfaces using maximum empty space and a lot of UI components like SVG icons, progress bars, image-maker, and more. There are many incredible components, unified styles, and customization options are available. You can create an advanced interface using components like Nestable. It uses reliable and conflict-free naming conventions. You can also design the complex flexbox-based layouts using plain HTML.

If you enjoy working with material designs then you should definitely check out this framework. It was created by Google in 2014 and this framework is a great solution for those who want to design websites or Android web apps. A lot of Google product is implemented on this framework such as YouTube, Gmail, Google Drive, and Google Docs. It comes with a handful of ready to use components and classes which allow you to get get your job done as fast as possible without putting so much effort. The framework uses a 12-column grid-based layout established by Bootstrap, responsive animations and transitions, padding, and depth effects such as lighting and shadows. Using its pre-built starter template you can design your website with minimal setup time.

As the name suggests Skeleton is the simplest and minimal responsive CSS framework to use. It contains only 400 lines of code but offers a huge variety of options to use in your project. Features such as grids, typography, buttons, forms, lists, media queries, tables, etc allow you to create a complex website effortlessly. We have mentioned it in the CSS framework but fewer lines of code don’t define itself as a CSS framework, library, or even module. It’s actually a boilerplate which is good for the small scale projects or for someone who has started their career as a UI/UX developer. It only comes with a limited number of standard HTML elements but that’s enough to get started with a simple and elegant website.

As the name suggests this another lightweight CSS framework designed for creating websites faster. The size of the framework is just 2Kb but it comes with a lot of features and web development tools to meet your requirement. It gives flexibility to the developer and allows them to use all the features offered by CSS3 specification. One can also extend this with a few lines of custom CSS.

We have mentioned a handful of CSS frameworks that are quite popular among developers but you can try your hands on some other CSS frameworks as well. Some other popular frameworks are Susy, Animate.css, Paper CSS, NES.css, Base, Tent CSS, Simple Grid, Spectre, Mustard UI, Picnic CSS, Mini.css, Gumby and a lot more are there.